Services are held regularly on Sundays. In addition to our Easter and Christmas services, we hold an annual Hymnathon, Animal Service, Family Service, Harvest Thanksgiving and special Candlelit Carol Service. Full details and times of these are always displayed in the Church porch.

Baptisms are usually held within our Sunday morning service. 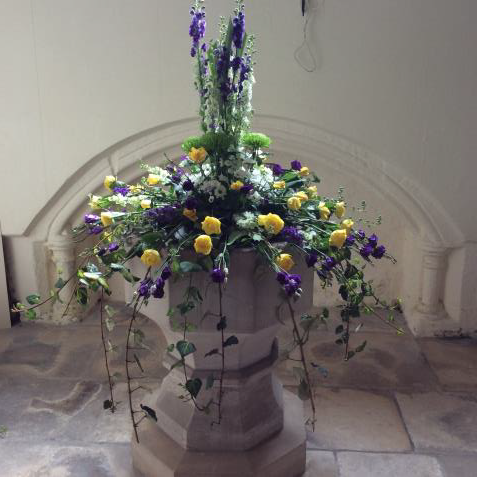 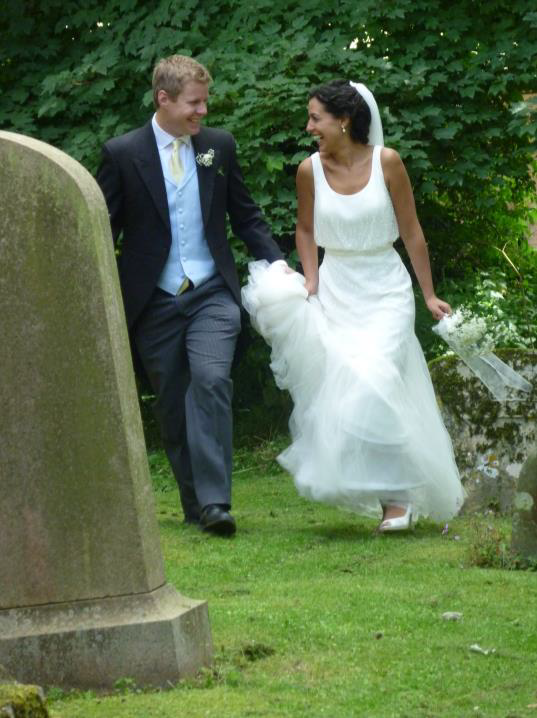 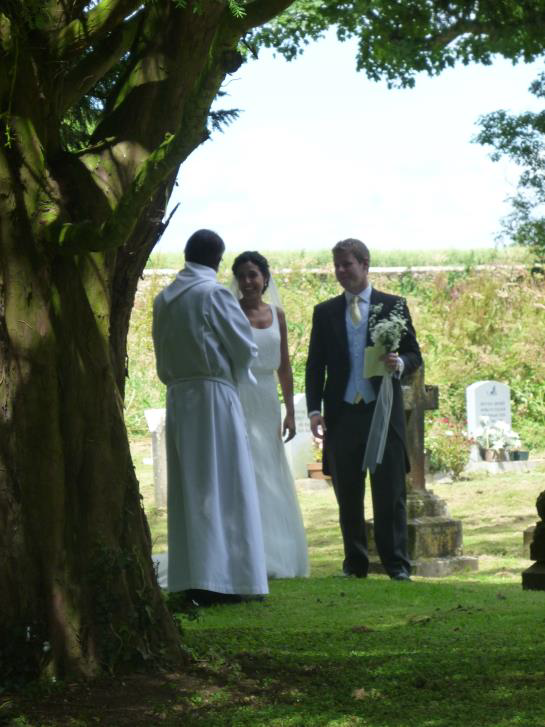 Weddings can take place on any day of the week. Our beautiful Church lends itself to the smaller, more intimate occasion, comfortably seating around 100 guests and up to 130 with extra seating.
We have an exceptional choir and organist which may be booked and, as you can see, this perfect setting is even more enhanced by beautiful wedding flowers –providing wonderful photographic memories 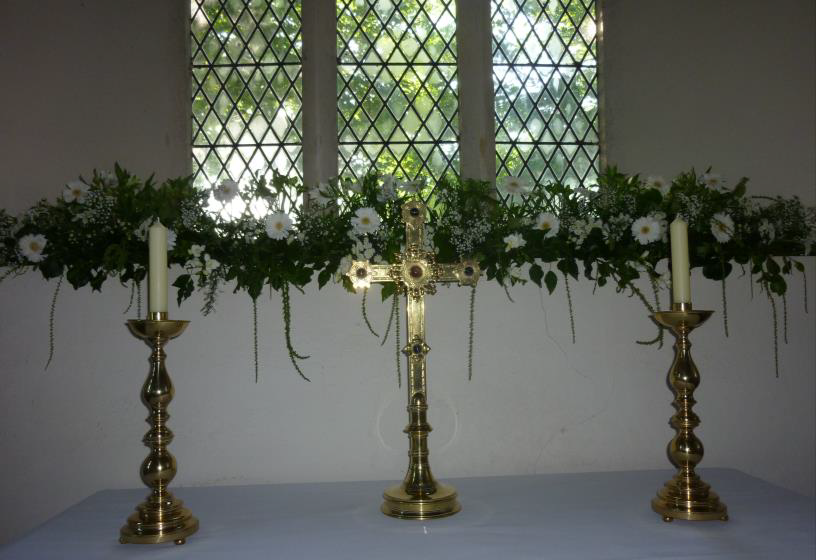 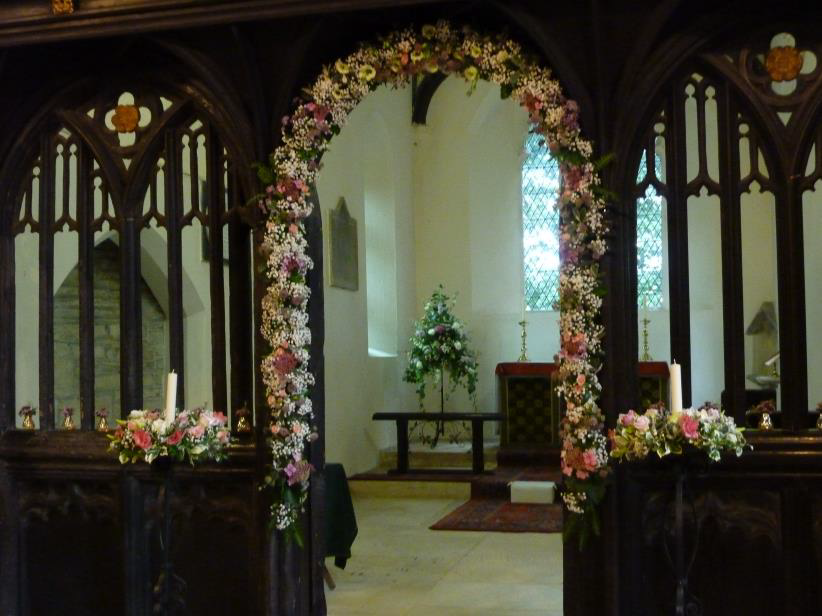 Funeral, Memorial and Thanksgiving Services can also take place in this most peaceful of settings.

If you wish to arrange any of these services please contact the Benefice office who will provide all necessary information:

You are always welcome to visit our Church at any time. 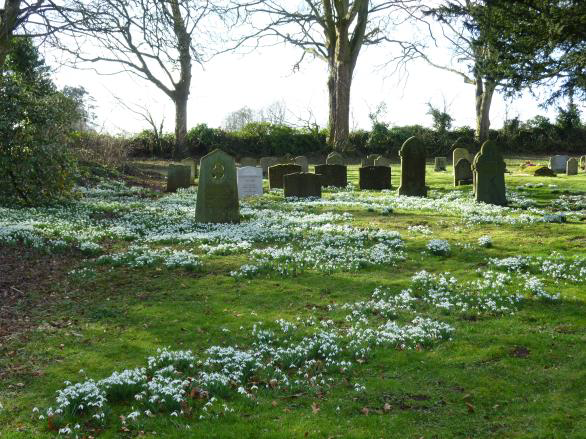 This beautiful Norman Church has been added to and altered from time to time and consists of a Western Tower with a Nave and South Aisle, said to have been built by Maurice de Gaunt in 1225 when he rebuilt the Castle.

The Transeptal Chapel and the Chancel were built by Thomas Lord Berkeley in 1361 when he refortified the Castle.

By the beginning of the nineteenth century the Church had fallen into a state of disrepair and it was not until 1842, when Mr R S Holford of Westonbirt purchased the estate, that repairs were set in hand.  It is probable that he used his architect Lewis Vulliamy who designed the mansion at Westonbirt and Dorchester House in Park Lane. Unfortunately much of the restoration work was carried out in poor taste - the Rood Screen was removed and the Church was seated with high and narrow pews.  The walls were newly plastered and some curious old frescoes on the north side destroyed, and the old carvings which ornamented the ancient font were cut away.

It was not until 1884, when the Rev. Arthur Blomfield became rector, that improvements were started and these were carried on over the next twenty-five years by the Rev. E W Evans and the Rev. J N Bromehead.  During this period the rood screen was rescued from the Rector's garden where it had been acting as a pergola.  Restoration was inevitably neglected between the war years and large sums of money have had to be spent over the past 20 years.

The Parish Registers date back to 1565 and contain many interesting entries - chief amongst them being those which relate to the families of Shakespeare and Hathaway.  Shakespeare undoubtedly knew Beverston and this part of the Cotswolds well, as he describes this district in Richard II.

At the Western end along the North wall there is an unusual squint passage into the Berkeley Chapel, which appears to be of the fifteenth century.

The two windows on the Northern side of the chancel, one Norman and one early English, were perhaps preserved and
inserted where they are now seen when an older Chancel was pulled down.

On the north wall there is an epitaph to Katherine Purie the wife of Thomas who was the Rector of Beverston for 54 years.  The translation is as follows:-

“She whom, deceased, this stone dot now o’erlay
Was twice named Cathera in no feigned way.
Each name, pure, pious, clean lived signifies,
And she was truly what each name implies:
For with pure heart pure ways of life she trod,
Pure was she here, now far more pure with God”. 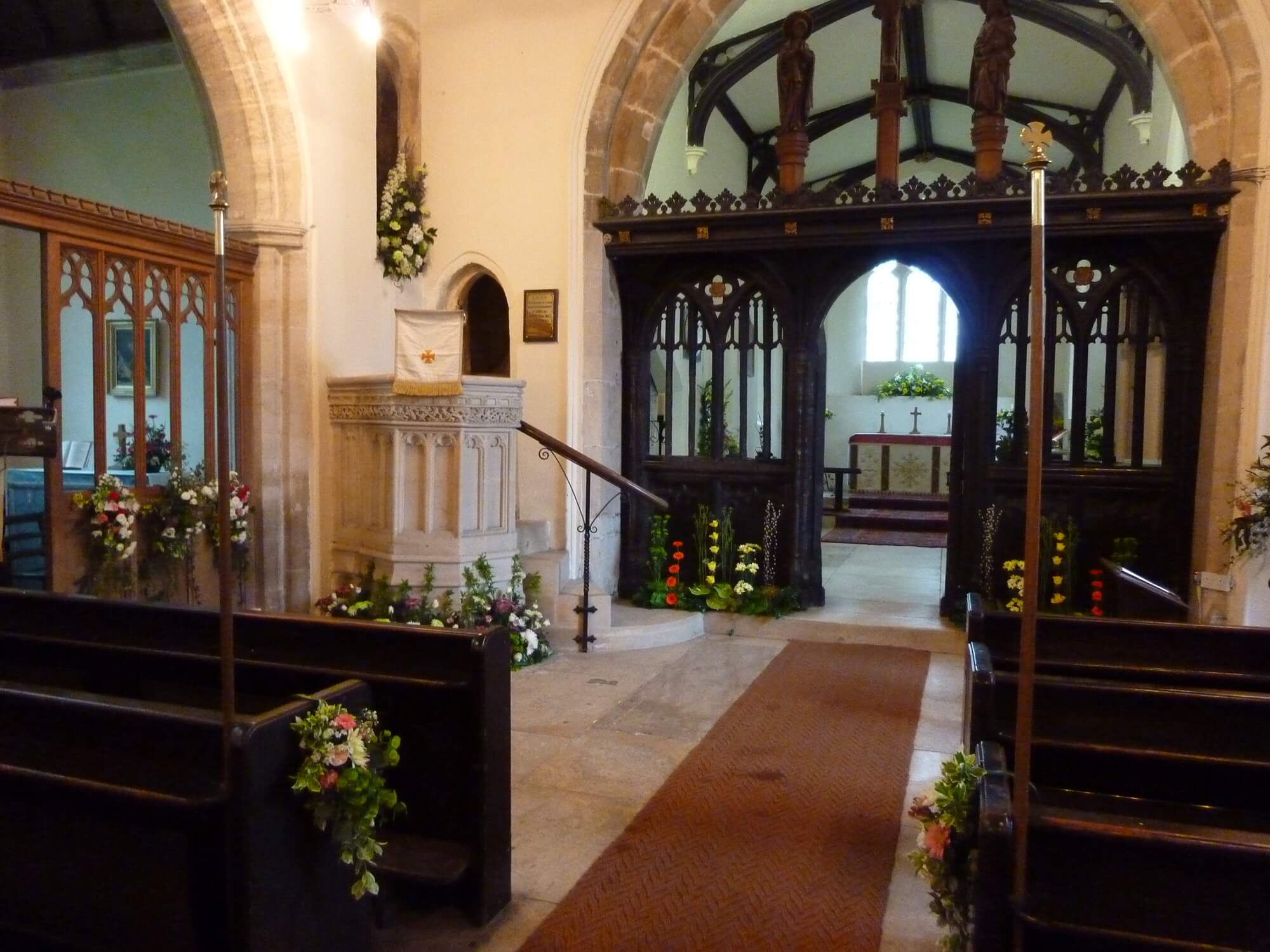 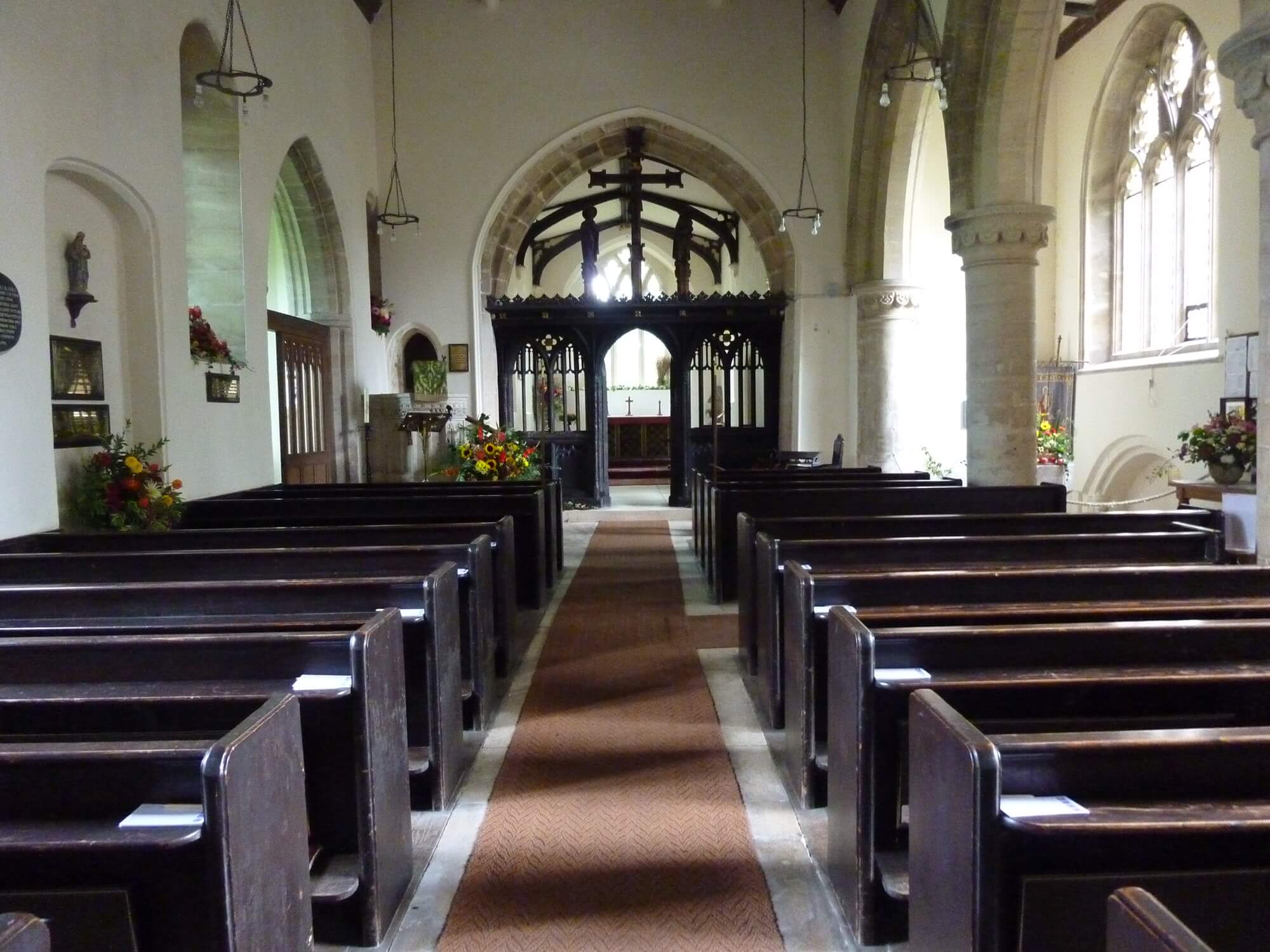 The Pulpit of stone, carved with panels and bands of foliage, is a good specimen of work of the time of Edward VI. Behind the pulpit there is a doorway leading up to an almost semi-circular headed opening which gave access to the former rood loft.

The arch into the Berkeley Chapel is fourteenth century as is also the single light window with the 1912 memorial glass.

The south side is occupied by a magnificent thirteenth century arcade of three bays supported on two free standing columns with beautifully carved capitals and bases.  The columns are about two feet in diameter and due to their wide spacing present a most impressive appearance.

Lewis Vulliamy designed the nave roof with indescribably ingenious trusses and corbels, used sideways on the East and
West walls.

The South wall has two four light nineteenth century windows, but on the early fifteenth century design.  Between the windows there is a magnificent Norman doorway which dates to the late twelfth or early thirteenth centuries.

The recessed opening in the wall appears from the columns to be on the thirteenth century, but the arch probably later.

The ancient font is now simple and plain design, after the cutting off of the ornamentation in the nineteenth century.

The Chapel is lit by a very fine fourteenth century window.  There is a beautifully carved grave stone in the north west corner, of the eighteenth century.

This is an original Norman Tower which was heightened with a new belfry in the fifteenth century.  On the South face there is a mutilated but beautiful pre-Conquest sculptured figure of Our
Lord in high relief, with the right hand raised in benediction and the resurrection banner in the left.

Built high on the North wall of the Nave and the West wall of Berkeley Chapel there are four stone coffin covers, incised with floreated crosses.  The one on the wall of the Berkeley Chapel has a triple cross of beautiful design and unusually elaborate workmanship. These covers are probably fourteenth century. 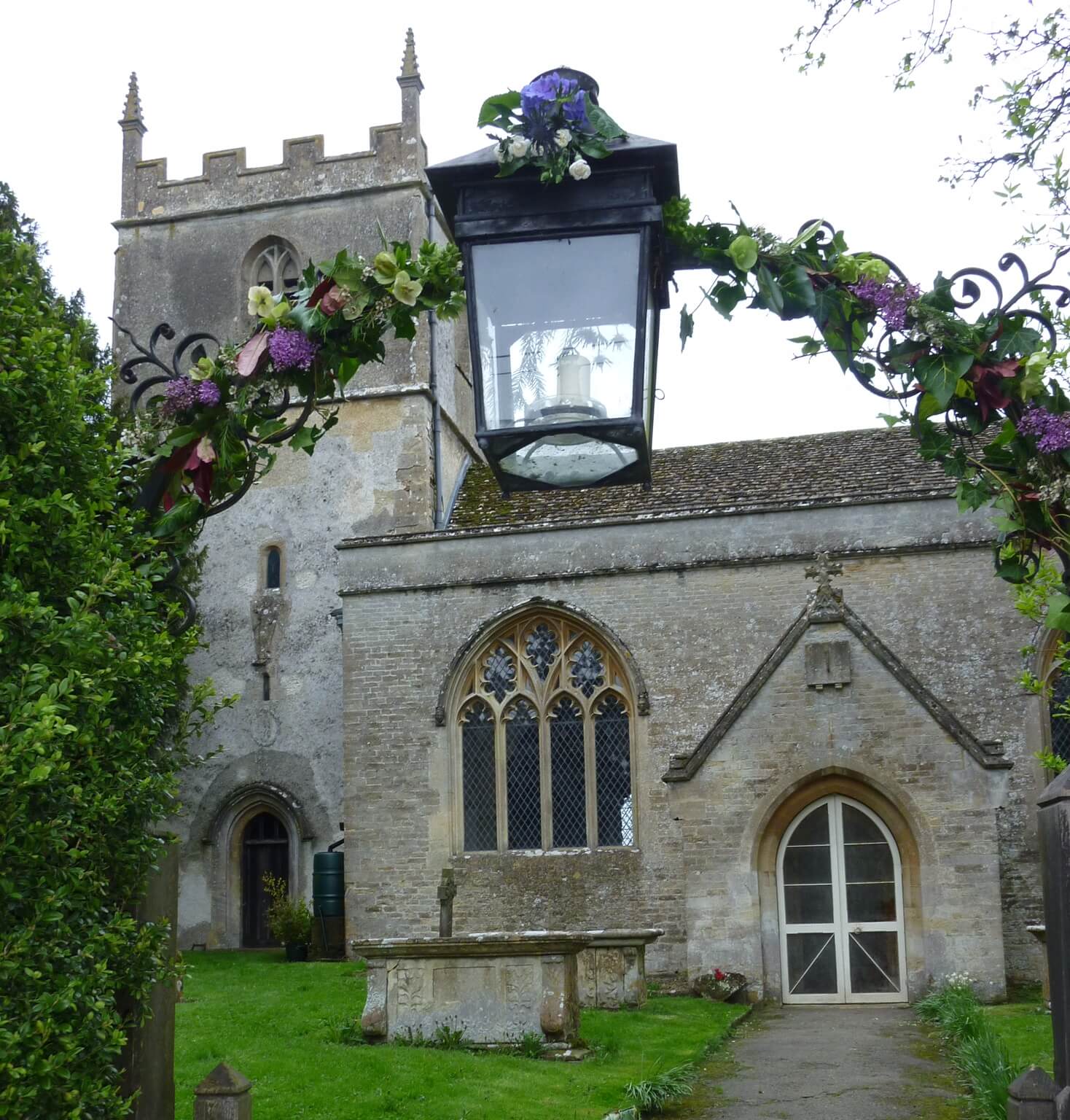 The Future - Our Goals

We have now installed kitchen and cloakroom facilities and during 2018 the heating and lighting has been updated throughout the church. Now that this work has been completed the Berkeley Chapel is able to be used as a meeting room. A very successful fundraising effort. 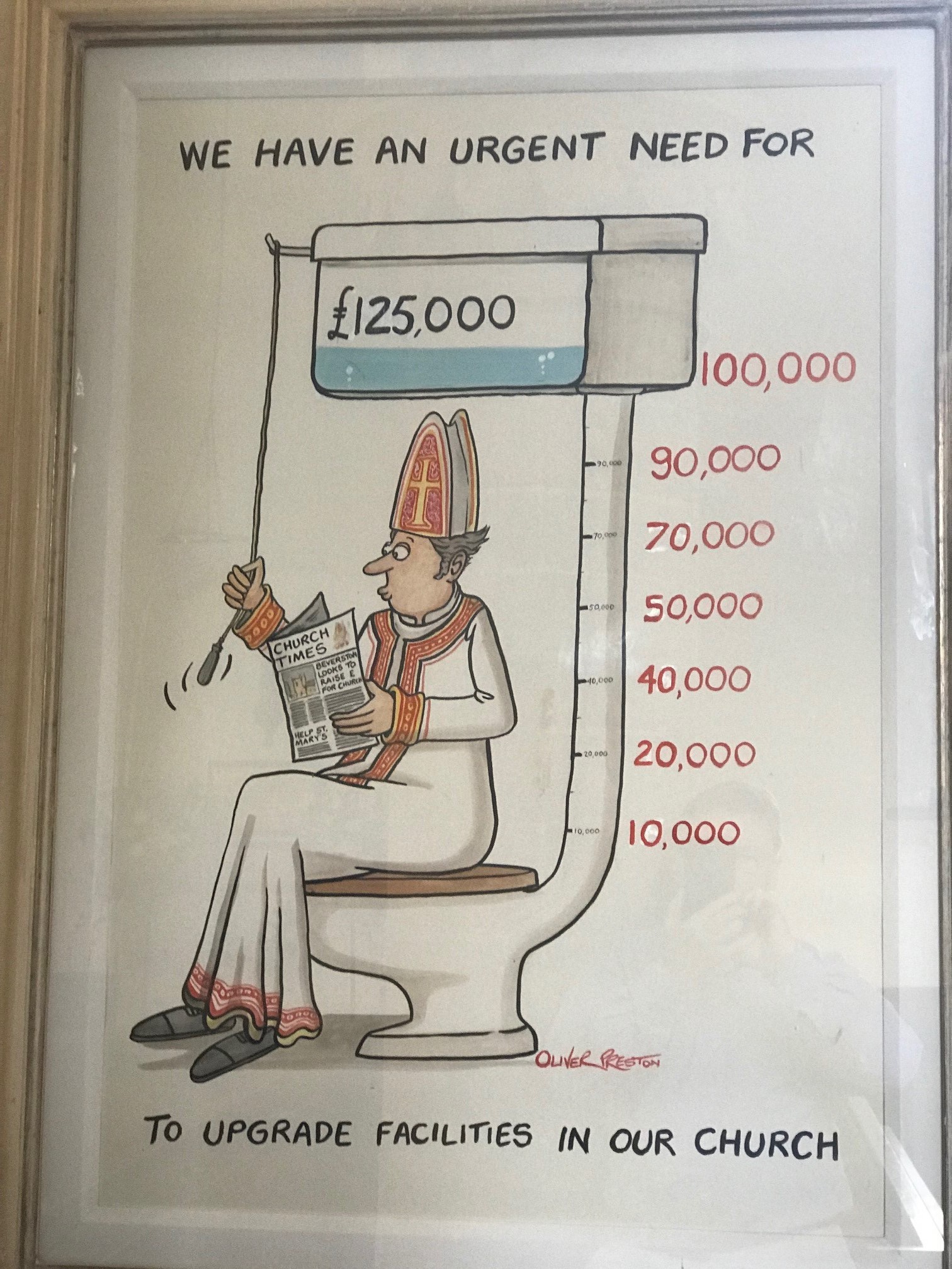